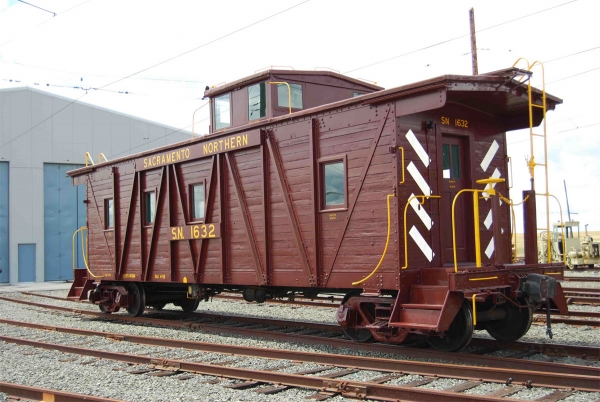 SN 1632 is an outside braced, steel underframe, wooden, cupola caboose. It was rebuilt from a boxcar.

This car started life as Western Pacific wooden boxcar 15451 in 1916. The boxcar was built by the Pullman Company as part of a 1000 car order. The Western Pacific needed cabooses with steel underframes to meet new California Railroad Commission requirement adopted in the mid 1930s. It rebuilt steel underframes boxcars into cabooses at its Jeffries Shops in South Sacramento to meet this requirement. Boxcar 15451 was rebuilt into caboose WP 607 in 1937. The Western Pacific started replacing its wooden cabooses with steel cars in the 1950s and 607 became surplus. It was sold to the Sacramento Northern in June 28, 1956. It was one of 10 similar cars, series 1630 to 1639, that were sold to the SN in the 1950s. A flush toilet was installed in August 1958 and electric lighting in March 1964. Caboose 1632 worked on the Sacramento Northern until October 1973, at which time it was the last surviving cupola caboose on the SN. Caboose 1632 was transferred back to the Western Pacific and became the caboose on the Oroville derrick outfit train, the only wooden caboose on the Western Pacific for many years. It was numbered WPMW 37-9 while in the derrick outfit. It was donated to the Feather River Railroad Society of Portola, California by the Union Pacific Railroad in 1984. This caboose was acquired by the Western Railway Museum on May 9, 2005.