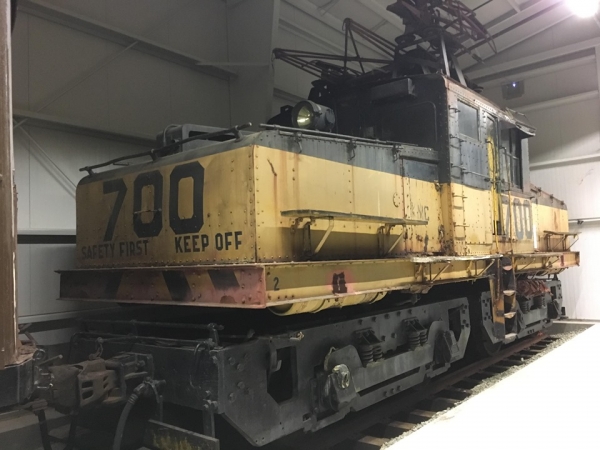 KCC #700 on its arrival at the Western Railway Museum. (BAERA Photo)

75-ton, 750-volt steeple cab locomotive. Built with pantographs and batteries for overhead or remote operation. This locomotive is equipped with a conventional pantograph and side pantographs to allow it to operate with the trolley wire off to the side to facilitate loading ore cars.

General Electric at their Erie Works built KCC 700 in 1926 for the Utah Copper Company. The Utah Copper Company acquired this unit as a prototype for use in their Bingham Canyon, Utah copper pit mine. 700 proved to be superior to both competing stream and Diesel locomotive types, and in time it was joined by 64 other locomotives of this class. It was retired in August 1984, when the copper pit converted to conveyor belts for moving copper ore, and was donated to the Western Railway Museum. This locomotive has two four wheel trucks in a style that is known as articulated trucks. This style has the couplers on the truck frame and the trucks are pinned together in the center of the locomotive. This system allows for large coupler loads being transmitted through the locomotive without involving the carbody structure. The carbody was painted black while under Utah Copper Company ownership and yellow with black trim after Bingham Canyon became part of the Kennecott Copper Corporation. Utah Copper Company became part of the Kennecott Copper Company in 1936.