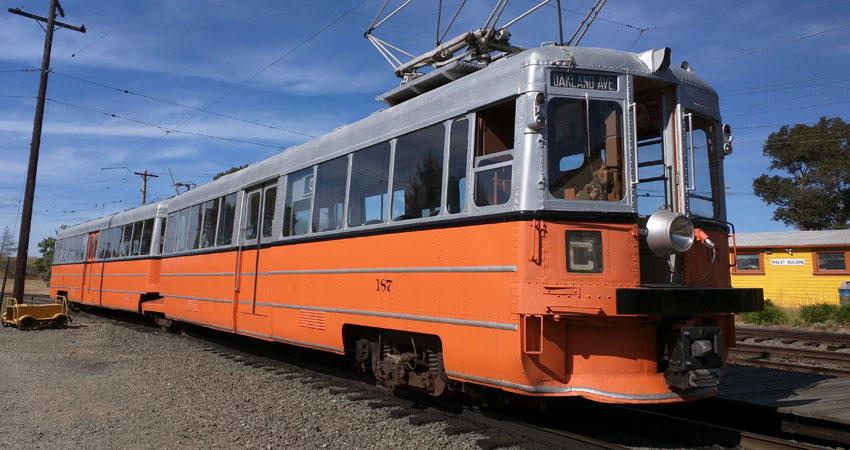 The name Key System is a generic one. The Key System was composed of a number of commonly owned corporations which operated ferry boats to San Francisco, connecting electric trains, and streetcars in the East Bay. Closely associated companies were active in real estate development. A company associated with Key System built that East Bay landmark, the Claremont Hotel.

Key System roots go back to 1893 when Francis Marion (Borax) Smith began buying railroads, streetcar lines, and real estate in the East Bay. Smith consolidated his transportation properties. In 1902 he incorporated the San Francisco, Oakland, and San Jose Railway. Service began on ferryboats and electric trains in 1903. Around the turn of the century, a formula for building a personal fortune consisted of buying a large tract of cheap land near a city and then building a streetcar line into the property. Land values would skyrocket so the property could be subdivided into home sites at a huge profit. The developers usually moved on to new projects leaving the streetcar company stuck with what frequently was an unprofitable line. Smith had big plans for his electric railway. He intended to extend it to San Jose and possibly beyond. He began planning another line from Oakland to Sacramento. However, Smith overextended himself financially. The East Bay did not develop as rapidly as expected. Smith's land companies could not sell lots fast enough to pay other expenses. In 1913 his empire collapsed and Smith was forced out. His big plans remained only dreams.

The "Key" nickname began when someone noticed that a route map was shaped like an old fashioned key. The official name, San Francisco, Oakland, and San Jose Consolidated Railway was a mouthful. The railway was promoted from the beginning as the "Key Route." This evolved into "Key System" which eventually became part of the corporate name. Components of the Key System were reorganized many times with different names over the years. However, East Bay residents always referred to the lines as The Key Route or Key System.

The Key System name finally disappeared in 1960 when the Alameda-Contra Costa Transit District took over Key System bus lines. Even today many AC Transit buses follow the same routes which were used by Key System trains and streetcars.

Key System Emeryville shops were north east of the present intersection of Interstate Highways 80 and 580 east of the Bay Bridge. A landmark large concrete smokestack on the site was all that remained of a Key System electric generating plant. The smokestack was demolished after it received serious structural damage during the October 17, 1989 earthquake.

The Western Railway Museum has the largest collection of surviving Key System equipment.