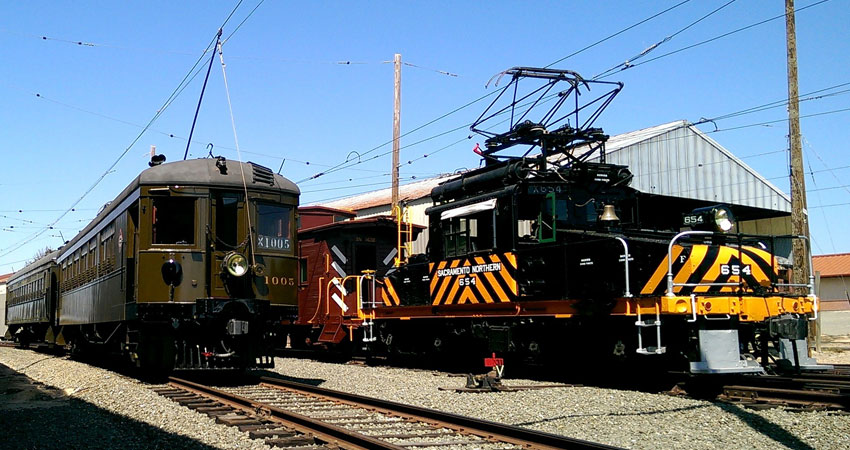 The Sacramento Northern resulted from merging two separate electric interurban lines. Northern Electric Company started building from Chico to Sacramento in 1905. The Oakland and Antioch Railway started construction in 1910. As the Oakland, Antioch, and Eastern it reached Sacramento in 1913. Both Northern Electric and the Oakland and Antioch line went through a number of corporate reorganizations and name changes. Western Pacific Railroad bought both interurban lines and merged them into the Sacramento Northern Railway at the end of 1928.

The resulting Sacramento Northern Railway was a remarkable line. It ran from San Francisco to Chico via Sacramento, a distance of 183 miles. It ran through a tunnel almost three quarters of a mile long in the Oakland Hills. A ferryboat carried trains across upper Suisun Bay. For many years Sacramento Northern was the fastest way to get from the Bay Area to Sacramento. Running time was two hours forty-seven minutes. Sacramento Northern operated dining cars and parlor cars as well as coaches. It operated commuter trains from Pittsburg and Concord to San Francisco. It also operated streetcars in Sacramento, Marysville-Yuba City, and Chico.

The last passenger train ran in 1941. Final streetcar operation was in Chico in 1947. Sacramento Northern became freight only. Gradually diesel locomotives replaced electric locomotives. Trolley wire came down. The electric third rail used between Sacramento and Chico was removed. The last electric freight locomotives operated in Marysville until 1965. Bit by bit the SN line has been abandoned and the tracks removed.

One of the last remaining stretches of the old Sacramento Northern main line goes past our museum. Our museum location is named Rio Vista Junction because SN passengers transferred to motor coaches at this point to go to Rio Vista and Isleton.

Rail service on the track passing our museum ceased in the summer of 1993. On July 15, 1993, our association purchased the remaining twenty-one miles of track and has preserved and upgraded part of it for museum operation. Working with plans, details and diagrams from the original construction, we have restored the electrification to approximately 5.5 miles of track. The Western Railway Museum now operates an 11-mile round trip interurban ride on the former SN main line using a variety of Sacramento Northern and other regional interurban railway cars.