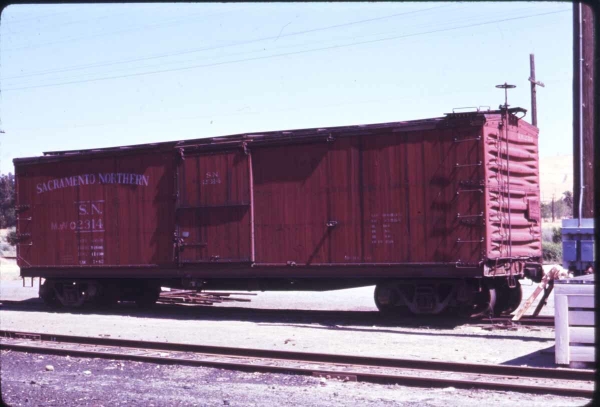 Sacramento Northern 2314 s a forty-foot wooden boxcar with double-sheathed sides, Dreadnaught steel ends, and a steel underframe. It has plain bearing trucks with Andrews side frames.

Sacramento Northern boxcar 2314 was built for the Western Pacific Railroad in 1918 by the Mt. Vernon Car Manufacturing Company as WP 17083. This car was part of series WP series 16001 to 18500. This series was rebuilt between 1927 and 1931 with two-piece steel ends. The 12” X 18.5” lumber door in the A end sheet was retained in the steel ends. WP 17083 was renumbered to WP 317083 in 1940 and restricted to online moves only. This is because the arch bar side frames had not been changed to Andrews side frames prior to the AAR prohibition of arch bar side frames in interchange starting in 1941. The Sacramento Northern series 2301 to 2327, 27 cars, were transferred from the Western Pacific to the Sacramento Northern in 1947. SN 2314 was converted to AB brake in November 1947 at the Chico shops. The car received Andrew cast steel side frames by the time it was in service on the Sacramento Northern. The car was removed from revenue service and transferred to work equipment service in June 1964. At this time the number was changed to SN 02314. It was retired in January 1975 and sold to Tracy Rail Car on April 23, 1975. They removed the couplers, trucks and brakes and delivered the car to the Shideler turkey farm in Manteca. The Museum acquired the car from Richard E. Shideler, Superintendent of Cars for WPRR, when his father passed.