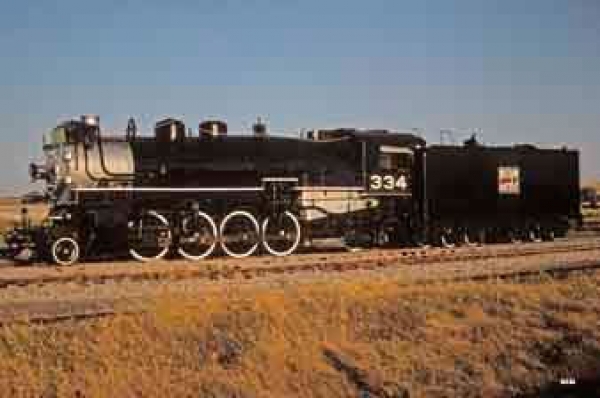 Western Pacific 334 was built by the American Locomotive Company in Schenectady, New York in 1929, 334 was one of a group of five identical engines numbered 332 thru 336. These were the last of a series of thirty six 2-8-2s purchased by the WP. The railroad bought them in groups of five or six every two or three years starting in 1918; all were built by Alco. Having eight driving wheels, a two-wheel lead truck, and a two-wheel truck under the firebox, this wheel arrangement was called a Mikado. The 2-8-2s were the medium-sized workhorses of the roads that used them. The WP used them system wide, from Oakland to Salt Lake City, primarily as freight engines, but they did pull passenger trains up the Feather River Canyon until 1936 when some 4-8-2s took over. With 63" drivers, 190 lbs. boiler pressure, and 28-by-30 inch cylinders, these engines could develop approximately 3000 horsepower at 40 mph, enough to haul a 60 car train. As 2-8-2s go, they were pretty hefty. The 334 weighed 332,000 Ibs. and had a tractive effort of 60,000 Ibs. The 334 also had one of the largest tenders on the WP. The tank held 15,000 gallons of water and 4,000 gallons of fuel oil, riding on six wheel trucks.
The 334 gave a good account of its self over the years, however by 1950 when the F7 diesel locomotives went into production, WP steam was doomed. 334's last revenue run was in October 1952. Sister locomotive 329 had the honor of making the last revenue run for a steam engine from Oroville to Stockton in June 1953.
For historical reasons it was chosen to be saved and reactivated for fun trips in March 1956. It was also used for a time in the Campbell's Soup Plant in Sacramento. In June of that year it ran up to Plumas County and return with WP number 94 on an excursion. That was its last run, and afterward it was placed in storage at WP's Oakland roundhouse until January 1967. It then was towed to Rio Vista Junction for static display on its own stretch of track.
Today the 334 patiently waits in car barn 2 for the day to be cosmetically restored and displayed again.
back to top