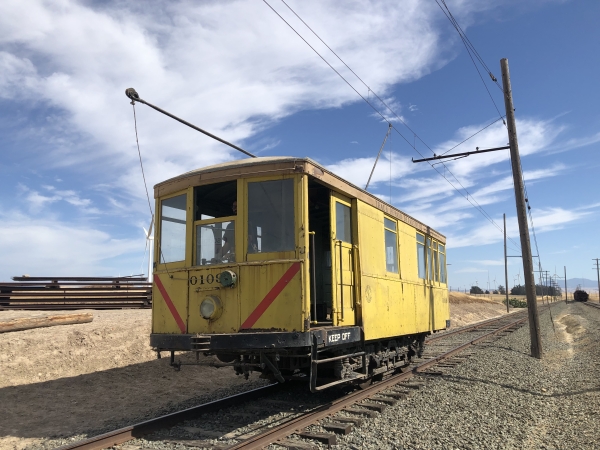 When this class of 12 cars was originally put into service by the Metropolitan Railway their configuration was that of a combination car with a single front open section followed by a closed section. Although shorter they were similar to today’s Powell Street cable cars. However, they could be operated from either end. The entire class was rebuilt by Metropolitan into “California” type cars during May 1894.

During 1900 eight Metropolitans were rebuilt into service cars by the Market Street Railway (of 1893). Four became two-cab flatcars (Numbers 0107-0110). They were thoroughly rebuilt by the Holman Car Company in 1900 for that purpose, being stripped to the floorboards and fitted with wooden cabs at each end. These cars were mostly used for hauling dirt, gravel, ballast, rails, and other large objects needed to maintain the railway. During 1904 they received Peckham trucks replacing the non-standard Bemis trucks. These cars were rebuilt later into rail –grinders. Cars 0107, 0108 and 0110 received new end metal cabs during the 1920s. They were retired and scrapped during 1941.

Rail-grinder 0109, however, was rebuilt with an enclosed body encompassing the entire length of the car. This car was the only former Metropolitan car to be used by the San Francisco Municipal Railway. It served as that company’s rail-grinder until the late 1970s. Grinder 0109 is the sole survivor of the 23-month independent Metropolitan Railway.