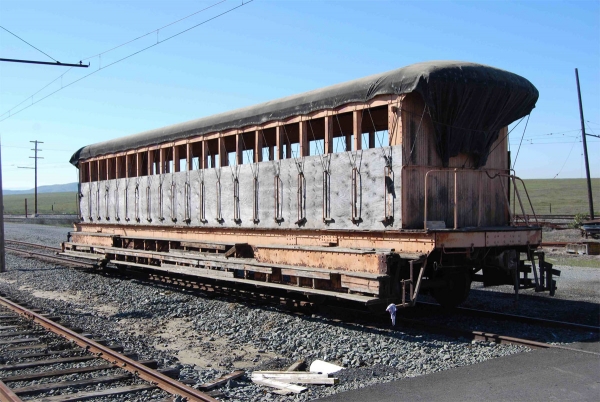 SLG&W 306 at the Western Railway Museum.

Salt Lake, Garfield and Western 306 is a classic open, cross-bench, interurban trailer. It has a steel frame and a wood and steel superstructure. It is complete with trucks, brakes and couplers. The car is part of series 302-313. The number on this car has not been verified.

The car was assembled by the Salt Lake, Garfield and Western Railroad in 1922. The steel work including the underframe, side posts and carlines were made and assembled by the American Bridge Company in Chicago. The railroad had carpenters assemble all the woodwork including the side posts, end bulkheads, steps and roof. The carbody hardware was salvage from the original open cars built by the St. Charles Car Company in 1893. This car spent its entire carrier serving the Saltair amusement park and dance pavilion. The pavilion was located on piles in the Great Salt Lake about one half mile from shore. The trains ran on a trestle from the shore to the pavilion. Trains of the open bench cars were operated between two of the SLG and W closed motorcars, which were powered from a 1500-volt DC trolley wire. As the lake receded traffic to the Saltair declined. These cars were towed by 44 ton Diesels after the electric operation was discontinued. By 1959 only four of the cars still existed. Two of the four surviving cars were donated to the Sons of the Utah Pioneers and were displayed for many years in the town of Corrine, Utah. Eventually these two survivors found their way to the small town of Heber where they were put on display at a small tourist railroad. In June 1993 car 306 was moved to the Western Railway Museum.