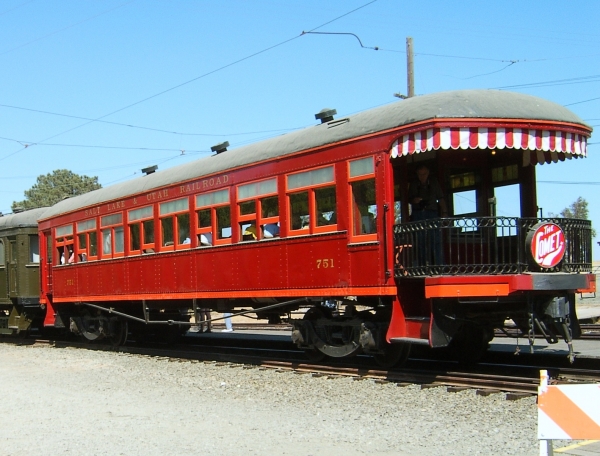 Salt Lake and Utah 751 was built by the Niles Car and Manufacturing Company in 1916. Niles Car Company ads in the Electric Railway Journal that feature this car advertise it as being convertible between a parlor car in the summer months and a coach in the winter. It is currently interpreted as a parlor car. When it was acquired by the Association it was set up as a coach with green plush walkover seating. The furniture currently in the car is from Western Pacific parlor car 652. Between 1916 and 1946 this car ran on the SL and U between Salt Lake City and Payson Utah by way of Provo. SL&U was an electric railroad powered by a 1500-volt DC overhead trolley. This car was one of the last cars built by Niles and one of only a few steel cars they built. This car was purchased by the Bay Area Electric Railroad Association in 1949 and was moved to California where it was used on excursions on the Sacramento Northern. It had back up controls added after it arrived on the Sacramento Northern. The car was moved to the Museum in November 1962.