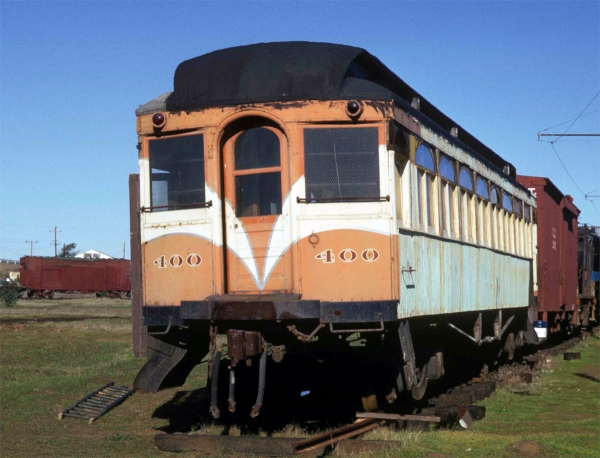 Bamberger 400 is a classic Niles coach.

The 400 was built in 1910 by the Niles Car and Manufacturing Company of Niles, Ohio. It was built for the Salt Lake and Ogden, a steam operated short line that was converting to 750 volt electric trolley for both freight and passenger operation. Car 400 ran between Salt Lake City and Ogden, Utah. It was built as SL and O car 403, a non-powered single compartment coach trailer. In August 1917 the name of the railroad was changed to the Bamberger Electric Railroad and the car became BER 403.

On May 7, 1918 the BER’s Ogden car house burned destroying many of their motorcars. With trucks and equipment salvaged from the burned cars, car 403 was motorized and renumbered to 320 on January 18, 1919. The car was converted back to a trailer, maybe as control trailer and renumbered to 400 on Mach 3, 1922. In the 1920s the Bamberger converted their cars to one-man operation. This included change in the control, windows, and doors. The one-man cars were repainted from the traditional dark olive to a much lighter yellow or orange paint

The depression hit the Bamberger hard and it went in to receivership in 1933. The company was reorganized and came out of receivership in July 1939 as the Bamberger Railroad. All passenger operation was discontinued on September 7, 1952. Car 400 was sold to a private collector shipped to Oakland and stored there. The car was then sold to a second collector. It eventually passed to the Bay Area Electric Railroad Association.