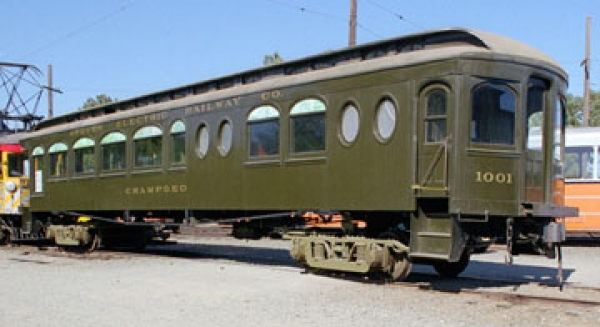 This is Oregon Electric Railway parlor observation “Champoeg.” This is a wooden Niles car with a clerestory roof and empire ceiling. It had traction motors and General Electric type M control when in service on the Oregon Electric. This car was one of two parlor cars on the OE; the other was car 1000, Sacajawea.

The Oregon Electric ran 122 miles from Portland to Eugene down the east side of the Willamette Valley. Car Champoeg was placed in service on October 15, 1912 operating in three car limited trains. The trip from Portland to Eugene took about 4 hours with the cars running around 45 MPH. Passenger service ended on May 13, 1933 and Oregon Electric sold the Champoeg to the Pacific Great Eastern Railroad in British Columbia. The electrical equipment was stripped and the car was renamed the “Bridge River.” The “Bridge River” served as a Business or Officers car for the PGE. In 1956 the PGE sold the Bridge River to the Willamette Valley Electric Railway Association. The car was moved to Glenwood, Oregon where it deteriorated badly until it was acquired by the Western Railway Museum and moved to Rio Vista Junction in 1974.