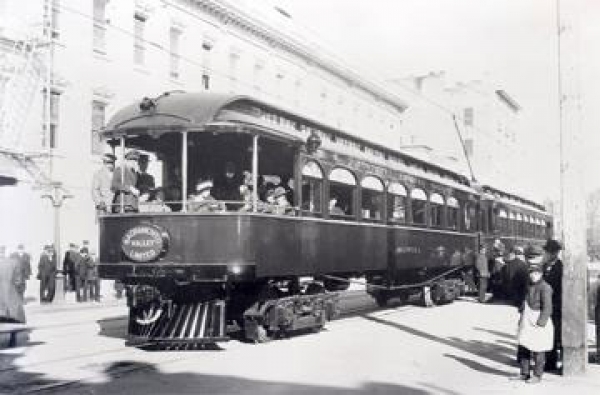 Car Bidwell is a wooden interurban dining/parlor/observation trailer car with a steam coach style roof. The front of the car has the classic Niles "California five-window end", and the rear observation platform features wrap around, solid modesty wainscotting.

This car was built by the Northern Electric Railway in its Mulberry Shops in Chico, California, under the direction of master car builder Adolphus O. Meier from wreck damaged coach 202, and intended for through parlor service on the connecting OA&E to the 1914 Panama Pacific Exposition in San Francisco. The 202, in turn, had been built by Niles Car and Manufacturing Company in 1906.

Constructed as a full parlor-observation and named in honor of General John Bidwell, founder of the city of Chico, a pantry and dining compartment were installed in the early 1920s. The Bidwell was used thereafter mostly as the relief parlor-diner.

The SN discontinued parlor-diner service in 1938, and after a few fan trips, one over the Bay Bridge, the car was retired and dismantled in 1941, with the body being moved to the town of Wheatland, California, where it served as a dwelling until acquired by the Association.

1914: parlor car Bidwell built on the frame of the 202 by NERy for through service on the OA&E to San Francisco to the Panama-Pacific Exposition.

1921: interior modified by installation of a kitchen, pantry, and dining area.

1978: the owners in Wheatland arranged a trade for a mobile home because they knew of its significance to SN history and of BAERA's long-time interest in the car.