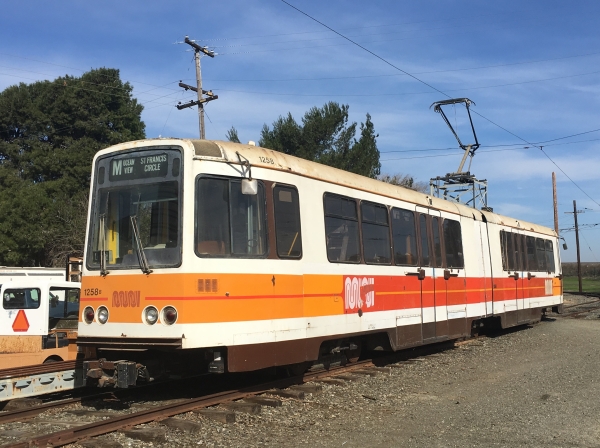 San Francisco Municipal Railway 1258 is a Boeing–Vertol Light Rail Vehicle. It is a three-truck, articulated, lightweight, steel car designed for either high or low platform loading.

With the end of the Vietnam War, the U.S. government had to come up with new ways to keep its defense contractors employed. One way was to design a Standard Light Rail Vehicle for the Urban Mass Transportation Administration, intended to replace the tired PCC cars (UMTA became the Federal Transit Administration in 1991).

In 1973 Boeing-Vertol began designing the SLRV for the San Francisco Municipal Railway, and the Muni ordered 100, which were numbered 1200-1299. The first revenue run of these new cars was in 1979.

In 1975 the Muni took on a whole new look with a new logo and color scheme designed by Walter Landor & Associates. The new logo became known as the "Muni Worm".

Boston's Massachusetts Bay Transportation Authority (MBTA, known in Boston as "the T") also ordered SLRVs. However, the T didn't care for the cars' performance, so they canceled the second part of the order, and the Muni ended up taking them. These were identical to the Muni SLRV except they had 2-1 seating and were numbered 1300-1329. They entered service in 1983. All 130 of these LRVs were plagued with many problems and were difficult to maintain. Most
cars averaged only 2,000 miles between failures.

In 1995 the first of the current fleet of Breda cars arrived, and this was the beginning of the end for the Boeing-Vertol LRVs. Between 1996 and 2002 the Boeing cars were retired and scrapped. On May 20, 2002 the Western Railway Museum acquired the 1258 from Muni, and it is only one of two Boeing-Vertol SLRVs to be preserved in railway museums.