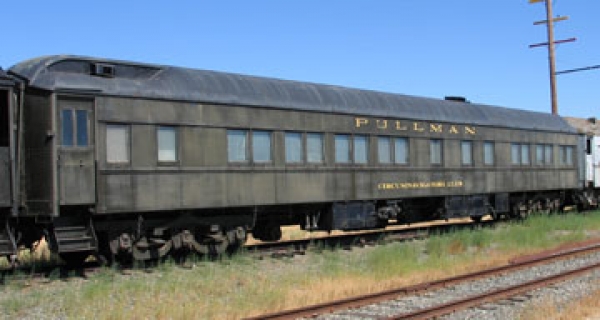 This is an 82-foot heavy weight steel Pullman configured as an eight section, buffet, observation car.

The car was built by Pullman Standard for the Pullman Company, lot 4528, as their car “Brady”. The car was part of a thirty car series “Balfour to Buttrick”. It was built as a 16-section sleeping car, plan 2412F, and was released for service on December 19, 1917. It was built with type LN air brakes and one 18-inch brake cylinder. The Pullman Company rebuilt the car into an eight section, buffet, observation car, plan 4025. It was released to service in this configuration on October 28, 1932 as car “Circumnagavigators Club”. The car was intended for service between St. Louis and Minneapolis-St. Paul on trains operated by jointly by the Wabash and Minneapolis and St. Louis Railroads. The rebuild included changing the air brakes to type UC. Ice air conditioning was added to the car on April 26, 1934. The interior plan was changed to 4025N on July 8, 1943. The significance of this change is not known. The color of the exterior of the car was changed from Pullman color (dark green) to two tone gray on August 30, 1954. The Pullman Company retired the car from service and sold it on October 1, 1965.