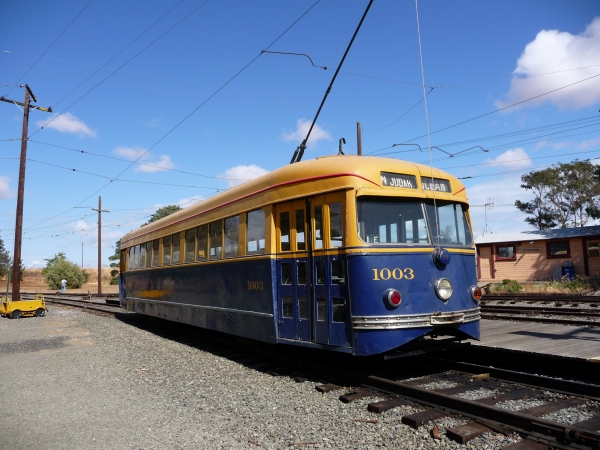 San Francisco Municipal Railway 1003 is the lone survivor of an order of five cars built by the St Louis Car Company for the Muni in 1939. The cars were like the Muni's standard "Iron Monsters" in that they were operable from either end and configured for a two-man crew. However, they were quite different in appearance. They were "streamlined", and quite similar in appearance and operation to a PCC car. Since the SF City Charter prohibited the payment of patent royalties (in this case to the President's Conference Committee, later the Transit Research Corporation), hand controllers were used instead of foot pedals, making them slightly different then the PCC.

When delivered new, it was painted in a blue and gold paint scheme to celebrate the 1939 World's Fair
on Treasure Island. Officially called "C-types", the cars rode so smoothly and quietly compared to the
heavy and noisy "Iron Monsters" that they soon gained the nickname of "Magic Carpets". After the war the cars were repainted to the green and cream wing scheme.

In 1954, the city's two-man ordnance was repealed and the cars were converted to one-man operation. Since the hand-operated controller made handling fares difficult in its one-man configuration, operators had to be specially trained on a limited class of equipment, the Magic Carpets became relegated to rush-hour service. The Muni found replacements in the form of second-hand PCCs from the St Louis Public Service Company in 1957.

Car 1003 was purchased by the Bay Area Electric Railroad Association in February, 1959 and has been restored back to its double-end configuration with the 1939 blue and gold paint scheme.