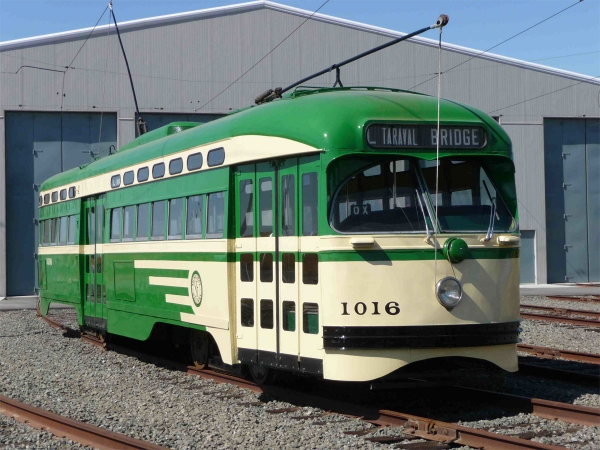 San Francisco Municipal Railway 1016 is a post-war all electric PCC car. It is a single-end car with back up controls.

SF Muni 1016 was built new for the San Francisco Municipal Railway by the St. Louis Car Company in 1951. It is the first car in the Muni's 1016 to 1040 series, which was the last order of PCC cars built in the United States. An all-electric, single-ended true PCC car, it was built as a two-man car with a conductor's station opposite the center doors. Muni desired double-end cars similar to the 1001-1015 streamlined cars, but with both St. Louis Car Company and Pullman-Standard winding down their street car manufacturing businesses, it had to accept a standard model similar to other PCCs built after WWII. The car was converted to one-man operation with front entrance in 1954.

Car 1016 was used on a Bay Area Electric Railroad Association excursion over the Muni lines in San Francisco on October 25, 1951 to celebrate the arrival of the new series of cars. It was replaced by the Boeing-Vertol Light Rail Vehicles in the early 1980s and purchased by the Western Railway Museum in October 1982.