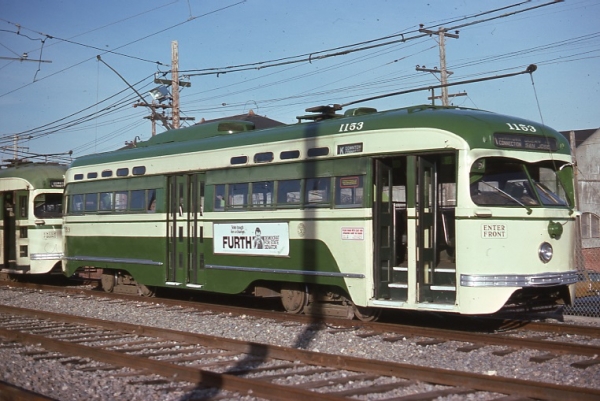 San Francisco Municipal Railway 1153 is a post-war, all electric PCC car. It is a single end car with back up controls.

In the mid to late 1950s, the Muni was looking to replace all remaining "Iron Monster" type cars with modern cars. Since the major street car builders were no longer building PCC cars, the Muni was forced to look for second-hand equipment from US cities which were closing down their street car lines. 69 cars were eventually obtained through lease arrangements with the St. Louis Public Service Company. SLPS refurbished the cars, repainted them, and installed back-up controllers salvaged from scraped Chicago Transit Authority PCC cars before shipment to Muni. SLPS 1746 entered service in San Francisco in 1957, repainted and renumbered as Muni 1153.

In the late 1960s/early 70s, Muni wanted to simplify the green and cream wing color scheme to save on labor costs, so it experimented, finally settling on the scheme the 1153 currently has.

Car 1153 was replaced by the Boeing-Vertol Light Rail Vehicles in the early 1980s and was purchased
by the Western Railway Museum in October 1982.