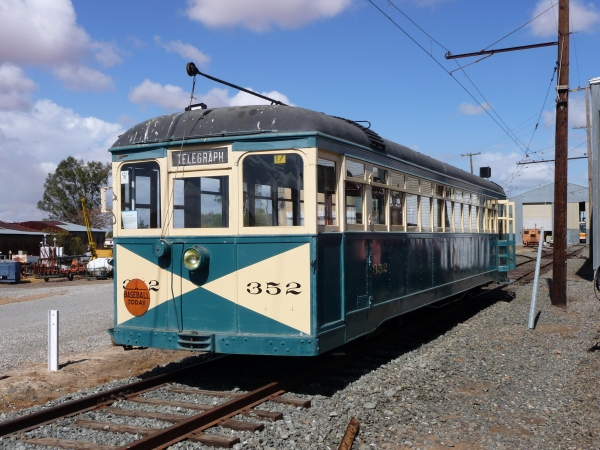 East Bay Street Railways 352 is a wood and steel, double-end, double-truck, arch-roof streetcar. It was built as a wooden deck roof, open platform, three compartment, longitudinal seating, fixed sash PAYE car on Brill 39E trucks. Over the years Key System rebuilt the car until today it is mostly a steel car with an arch roof, closed platforms, single compartment, with walk over transverse seats, sash that raises and Brill 77E four motor trucks. Car 352 is part of series 351 to 410.

The car was built by the St. Louis car company in St Louis, Mo. in 1911. It was used in streetcar service in the East Bay Area until 1948. It was heavily rebuilt over its life and has had several different corporate ownerships, but it always used in the same service area. These ownership changes resulted in many different paint schemes and names being on the car over its lifetime, but it always retained the same number. When the car was retired it was stripped of electrical and mechanical equipment and used as a storage shed behind a house in the Berkeley hills. The car was restored in the Museum’s shop to its current operating condition in 1985 using parts acquired all over the world. The car is currently in its 1931 appearance.