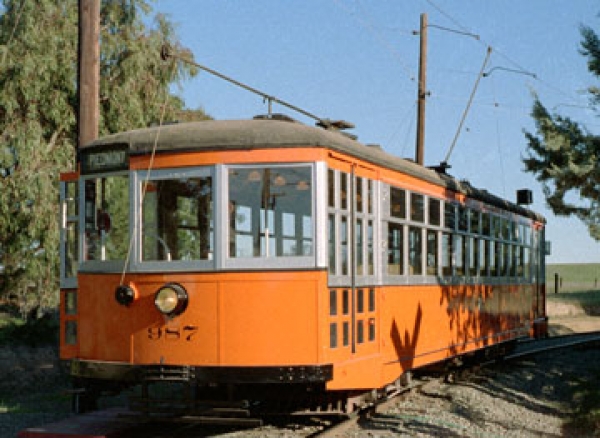 Key System 987 is a home built, lightweight, steel streetcar with type M control. It is a double-truck, double-end, arch-roof car.

This car was built by the Key System in their Emeryville shop in 1927. It was numbered 899 and was a copy of their other 900 series cars built by American Car Company. This series of cars was the first modern low floor flush platform cars of this size to run in the San Francisco Bay Area. It has been several different configurations over its career. It was a two-man car with double folding doors on both sides of both platforms. For a while it had couplers and could run in MU with other cars. In 1930 the first car numbered 987 was hit by a train in Oakland and damaged beyond repair. Since that car was pledged to secure bonds, car 899 was renumbered to 987 to take its place as security for the bonds. As currently configured it is set up as a one-man car with the left hand doors disabled, but still in place. When the Association acquired the car in 1948 it had no place to store the car so it was shipped to the Portland Traction Company where it ran as PTC 4011 until it discontinued operation in 1958. Then it was returned to California and was stored at Colusa until the Western Railway Museum was established. Car 987 was moved to Rio Vista Junction in November 1960, being the second car to arrive.