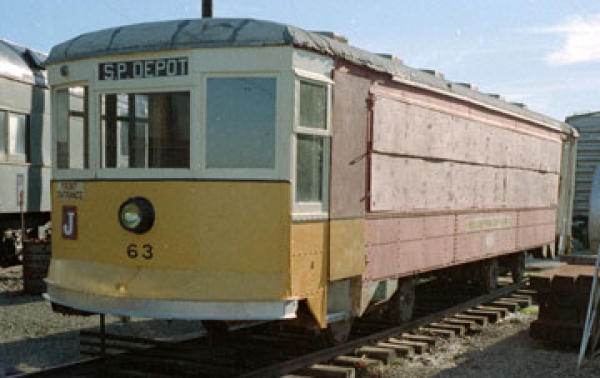 Pacific Gas and Electric 63 is a double-truck, double-end, lightweight, all steel, Birney Safety Car that ran in Sacramento,California. It has a deluxe interior, including leather seat cushions, and was equipped with treadles to operate the rear doors.

The 63 is one of a twelve car order numbered 56-67, which were delivered in December 1929 and put in service on Christmas day. Ever afterwards these cars became known as the"Christmas Present cars".These were the last cars to be acquired by PG&E for Sacramento before Sacramento City Lines took over of the system.Like so many Sacramento cars, the 63 was underpowered on account of being equipped with only two 40-horse power motors. By the time the 63 was built, American Car Company had become a subsidiary of J. G. Brill, and Brill had been acquired by American Car and Foundry. As part of this corporate reshuffling, American Car Company was was shut down onJuly 1, 1931, barely 18 months after building the ChristmasPresent cars.