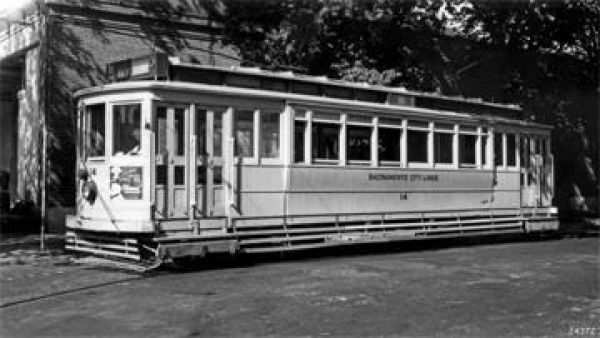 As built, the car had a flat front with exposed posts. It also hadAs built, the car had a flat front with exposed posts. It also had fixed side sash, which is an unusual feature for Sacramento, a city notorious for its hot summers, and was equipped with a single trolley pole mounted in the middle of the car. #14 is one of the group of "rope brake" cars, which used power-assisted hand braking. The mechanism consisted of a rope about 2" in diameter between the hand brake staff and the brake levers on the car. In between, it was fed one turn around a capstan mounted on the leading axle of the front truck, with the same arrangement at the opposite end. Using the hand brake lever to pull on the rope caused the rope to tighten around the capstan, which in turn produced an even greater pull on the brake levers. There was a second brake lever which was directly connected to the brake rigging for use in parking the car and whenever a rope broke. This rope brake apparatus was replaced by air brakes by 1930.