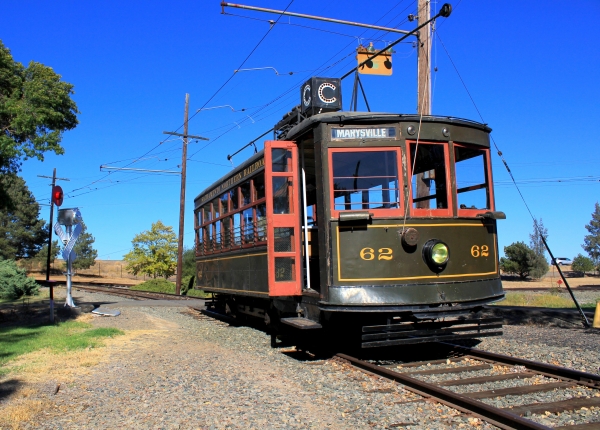 SN 62 at the boarding platform at the Western Railroad Museum. Hunter Lohse Photo

This car was built in 1920 by the American Car Company in St Louis, Mo. for the San Diego Electric Railway as their car 301. San Diego was dissatisfied with the car and sold it to the Sacramento Northern Railroad in 1923. The car operated on the Sacramento Northern streetcar lines in Chico, Marysville and Sacramento. At first it was painted like the interurban cars in dark olive green with gold lettering and a black roof. But this was quickly changed to the cream with blue doors and window sash that was used until the end of service. This change to lighter colors was usually to make the streetcars easier to see at night when automobile traffic became significant. The last SN streetcar operation was in Chico, and that was discontinued in 1947. This car was acquired by the Bay Area Electric Railroad Association directly out of service from the Sacramento Northern Railway in 1947. All the equipment is original to the car. The car was used for excursions on various California electric railroads prior to coming to the Museum in August 1964. Car 62 is the only Birney car to ever operate in San Francisco.

1947: retired, sold to a scrap dealer and then purchased by Bay Area Electric Railroad Association.

1947-1964: used on fan trips on the Key System, Muni, and the SN electrified trackage in Yuba City-Marysville.

1984: trucked to San Francisco for a test run in anticipation of use in the SF Trolley Festival.